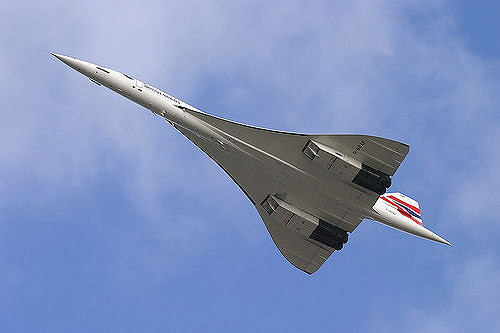 Massed Bands Take To The Airwaves

Triangle Radio, a community radio station based in the Forest of Dean, are set to feature a special ‘Strike Up The Brass’ show broadcasting highlights from a ‘flight’ themed concert performed to commemorate the final Concorde ever produced.

As the last Concorde ever made (Concorde 216) moves into a new home at the new Bristol Aerospace Centre, music fans will have a chance to hear an aviation themed concert make a ‘return flight’.

On November 27th last year, 270 performers from 3 brass bands and 3 choirs came together just a few runway lengths across Bristol from the new Aerospace Centre, to celebrate the city’s aviation heritage.

The “Innovation 216” concert was part of “The Art of Flight” series of events at St George’s concert hall in Bristol. On the programme were popular tunes such as “The Dambusters March”, “633 Squadron” and “Those Magnificent Men in their Flying Machines”.

The finale was commissioned by Bristol 800 and composed by Dr Liz Lane, Senior Lecturer in Composition & Performance at UWE’s Computer Science & Creative Technologies Department. “Innovation 216” was played by the massed brass bands, conducted by Ian Holmes, with the choirs singing words specially written by Jennifer Henderson and members of Bristol’s aerospace industry.

The concert was recorded by students from UWE Computer Science & Creative Technologies Department under Lecturer Luke Reed.  With the kind permission of UWE and all the performers, highlights of the concert and an interview with composer Liz Lane will be broadcast on Tuesday 14th February at 7pm and repeated Sunday 18th February at 9pm on Triangle Radio’s ‘Strike Up The Brass’ show.

Listeners can ‘tune in’ to the unique concert via the internet on Tuesday 14th & Sun 19th February at www.triangleradio.co.uk