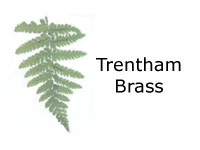 On Sunday 12th February the members of Trentham Brass gathered for a six hour rehearsal on this year’s Regional Championships Test Piece ‘ Darkwood” by Dan Price with a seven strong team of tutors from Foden’s led by Mark Wilkinson.

During the first hour of full band, MD Mike Caveney regaled the players with sixty year old memories when his grandad, who lived off Victoria Avenue in Blackley, used to take him to Boggart Hole Clough where they sat by the lake drinking lemonade from a glass bottle through a waxed paper straw. After lunch, the band split into sections to work through the piece.

Trentham Brass have a dress rehearsal this Sunday at the NEMBBA contest at The Post Mill Centre in South Normanton.