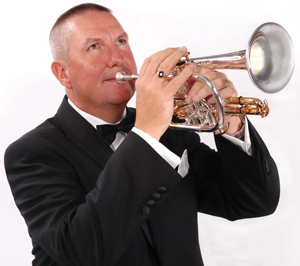 It has been announced that cornet and soprano star, Alan Morrison, has taken the reluctant decision to hang up his boots as a player for the final time.

Alan will be remembered as one of the most successful cornet players in history, having held the principal cornet seat at both Grimethorpe Colliery and The Brighouse & Rastrick Band for extensive periods. This boosted his reputation as a soloist, having toured all over the world and releasing numerous solo CDs.

Alongside playing, Alan was also regarded as a high quality conductor, bringing Aceprint Gawthorpe Victoria band from 4th section up to 1st, before taking up the musical director role at The Brighouse & Rastrick Band and then The EYMS Band.

Alan will be remembered in his later years as he showed the banding world his talent on the soprano cornet, assisting The Brighouse & Rastrick Band in many fine performances in the past two years.

Alan will remain as a chairman for the Associated Board of Brass Band Adjudicators. He will also stay with The Brighouse & Rastrick Band throughout the audition process for a replacement and his final performance with the band will be at the European Championships this April.

Alan told A4B: “It is now over 50 years since I walked into my first band room at Cargo Fleet Works Junior Band near Middlesbrough and since then I have always been involved regularly with a band whether it has been as a player or conductor.

The time however has come to “hang up the boots” and retire gracefully into the back ground. The last couple of years with the amazing Brighoue & Rastrick Band has been a fantastic experience and brings the curtain down on my playing career at the very highest level. The time is right to hand over the seat to a young gun that is the future and I wish all involved in this fantastic organisation every success for the future.

Although this is the end of my playing and conducting career, I will continue to adjudicate as and when invited and look forward to a relaxed retirement that at last may allow me to improve my golf handicap.”

All of the members of the Brighouse & Rastrick Band would like to thank Alan for his dedicated support as a fine Soprano Cornet player and also for his commitment in the band manager role, and would like to wish him a relaxed, retired life with his wife, daughters and his recently born grandchild.

The Brighouse & Rastrick Band would also wish to invite applicants to audition for the soprano cornet seat. You can confidentially apply by emailing [email protected]

The deadline for applying is March 23rd.