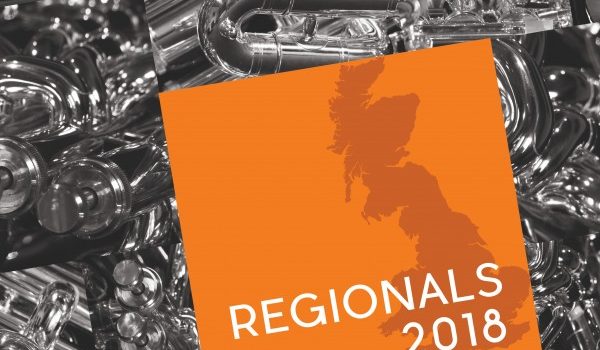 The 2018 Test Pieces for the Regional Championships have been announced.

Championship Section: Odyssey (Kevin Norbury)
This work was selected as the Championship Section Test Piece for the 1999 European Brass Band Championships held in Munich. Inspiration for the work centers around the hymn “Be Thou My Vision” and Dante’s Inferno. With angular melodic lines, dissonant harmonies and pounding rhythms, the work undergoes a number of stylistic changes, from the seriousness of the opening to exuberance and triumph at the end.
Purchase now: Click Here

Section 1: Brass Metamorphosis (James Curnow)
Brass Metamorphosis as the title suggests is a set of variations based on an original theme. Each of the five variations is in a different style with the first being a lively rondo, the second slow and intense, the third an agile scherzando, the fourth slow and expressive and the fifth full of majesty as it brings the piece to a triumphal close.
Purchase now: Click Here

Section 2: Ex Terra Lucem (Jonathan Bates)
Ex Terra Lucem, translating ‘From the Ground, Light’ is the motto of the Merseyside town of St Helens, which pays homage to the rapid growth of the town during the industrial revolution.  This motto was also a large influence on Danny Boyle’s opening ceremony for the 2012 Summer Olympic Games in London. Ex Terra Lucem is composed for, and dedicated to, Jay Hall and the St Helen’s Youth Brass Band, following his appointment as musical director of the band in July 2016.
Purchase now: Click Here

Section 3: Napoleon on the Alps (Philip Harper)
This dramatic piece is based on the famous oil painting by Jacques-Louis David, ‘Napoleon Crossing the Alps’. There are three parts: Approaching the Great Saint-Bernard Pass depicting snowy mountains and the determined march of the Napoleonic Army: The Emperor Napoleon a noble and heroic theme, accompanied by stately fanfares with an exotic flavour: and Onwards, to the Empire! describing Napoleon’s relentless drive to expand the French empire across the globe at. This piece was first performed directly in front of the Napoleon Museum in Arenenberg, Switzerland in Summer 2016.
Purchase now: Click Here

Section 4: World Tour (Rodney Newton)
This extended work was commissioned in 2006 by Besses o’th’Barn Band to mark the centenary of its 1906 world tour. In four movements of contrasting style we’re taken on a journey from Liverpool to Melbourne.
Purchase now: Click Here

All of the set works and the Regionals 2018 CD are available now from the Brass Band Music Shop. Visit them at www.brassband.co.uk