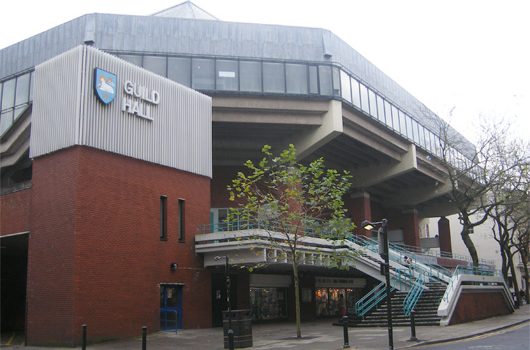 Brass at the Guild Open to Bands

Entries from bands wishing to compete at the 2018 Brass at the Guild contest which also incorporates the British Open Youth contest are now being accepted.

Once again the event has gained invaluable support from R. Banks & Son (Funerals Ltd) and its proprietor Brian Halliwell, a life long bandsman and supporter of the banding movement.

Organised by Lancashire Contests and with additional support from the British Open Championship organisers, the event takes place at Preston’s Guild Hall on Sunday 28th January.

Competing bands will once again be given the choice of which set work they wish to play — with the opportunity to showcase either the works chosen for the 2018 Butlins Mineworkers Championship or Regional Championship.

As a further incentive competitive incentive, the highest placed band in the Championship Section, who is not already invited to compete at the British Open Spring Festival in Blackpool, will gain an automatic invitation to in the Senior Trophy.

Bands are requested to advise the contest administrator by the closing date for entries of their choice of work and a score for the adjudicator must be provided on the Contest Day of any Butlins work selected.

The adjudicators for the day will be announced in due course.

Lancashire Contests has also confirmed that the event will once again include the British Open Youth Championship, which will take place in the Charter Theatre.

A spokesperson for the contest told A4B: ‘We are once again delighted that the prestigious British Open title is on offer through the kind permission of Karyn and Martin Mortimer, to whom Lancashire Contests are very grateful.’

The format of the youth competition is a 20 minute own choice entertainment programme. The test pieces that bands can choose are as follows:-

British Open Youth at the Guild:
A 20-minute own choice programme
Schedules and entry forms can be down loaded from www.lancashirecontests.com