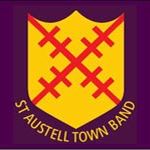 St. Austell Town Band are delighted to announce the appointment of David Nicholson as their resident Musical Director.

David will work in close association with Steve Sykes, the band’s Professional Conductor. David’s musical background is rooted in The Salvation Army, where he was Bandmaster of the Birmingham Citadel Band for 10 years and a brass instructor at a number of the Army’s regional music schools. He is also a former member of the International Staff Band’s Euphonium section.

David had a break from banding for a number of years when his work required him to be based overseas, however his move to Cornwall 3 years ago has enabled a return to the brass band scene, culminating in this appointment.

When asked about his new role, David told A4B: “St. Austell Town Band is comprised of many talented and dedicated players, all of whom are ambitious and positive about the future. There’s a sense of unity, purpose and direction here, a solid work ethic and a common desire to strive for the highest possible standards. These are infectious qualities which I believe will contribute to the future success of the band. I am honoured and excited to be joining such a group and playing a leadership role in the journey ahead. I already feel part of the St. Austell Town Band family!”