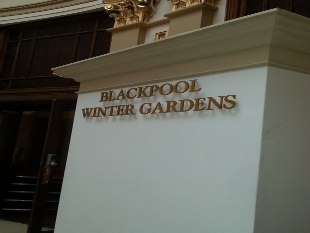 Published on November 1st, 2017 by gavin

The British Open is pleased to announce the Test Pieces for next year’s Spring Brass Band Festival to be held at The Winter Gardens, Blackpool on Saturday 12th May .

The Test Piece for The Grand Shield will be Professor Peter Graham’s’ ‘The Triumph of Time‘ with Frank Wright’s arrangement of George Bailey’s ‘Diadem of Gold’ for The Senior Cup and ‘A Kensington Concerto’ by Eric Ball for the Senior Trophy.

‘The Triumph of Time‘ was commissioned by Professor Nicholas Childs for Black Dyke to play at the 2014 European Championships in Perth.

In his notes to the score, Peter Graham states ‘As I began preparations for the commission it occurred to me that 2014 marked the 25th anniversary of the publication of one of my earliest works for brass band, The Essence of Time. Listening to the piece for the first time in a number of years I was struck by its energy, optimism and sheer joie de vivre. Reflecting on these impressions I wondered if I might capture something of the spirit of The Essence of Time in a new work, and whilst not using any of the existing musical content perhaps draw upon some of the structural elements.

Like The Essence of Time, The Triumph of Time is a set of variations for band which follow roughly the same moods and characteristics of its older relative’.

‘The Triumph of Time’ was used at The British Open in 2016 and as was the case then in agreement with the composer, the opening chiming bells heard on CD in its original première will not be part of the performances.

‘Diadem of Gold’ was originally known as “Ouverture Caractéristique” and it was composed by Guillaume Balay, who was conductor of the famous Garde Républicaine, Paris.

Frank Wright transcribed the work for the 1953 National Finals before being used
at The Open in 1977. Whilst it has been performed as an own choice work by bands over the years, it was last selected as a set test at the Danish National Championships in 2015, with its last competitive appearance in the UK being in 2001 at Pontins.

Eric Ball’s ‘A Kensington Concerto’ is one continuous movement and was first heard in 1972 at the National Brass Band Championships in London. The work is a test of musical lyricism right from the opening melody on solo cornet.

The Grand Shield
The Triumph of Time (Peter Graham)

The interest from bands wishing to gain entry to the qualifying contests for The British Open remains as popular as ever with the highest placed band in the Championship Section at the Bolsover Festival of Brass, Wychavon Festival of Brass and the Fife Charities contest (who is not already invited) earning them an invitation to compete in the Senior Trophy.

Two further qualification places in the Senior Trophy will be made available for the highest placed band in the Championship Section at next year’s Brass at the Guild on Sunday 28th January and the Welsh Open in Porthcawl on Saturday 17th February.

A spokesperson for the contest told A4B:- ‘Our congratulations go the bands who have already qualified to compete in the Senior Trophy in the three contests this autumn and we thank the contests themselves for their enthusiasm and willingness to offer a direct qualification link to the Spring Festival.’

Details of the start times, prizes, the competing bands, adjudicators, venues and ticket information will be announced in due course.