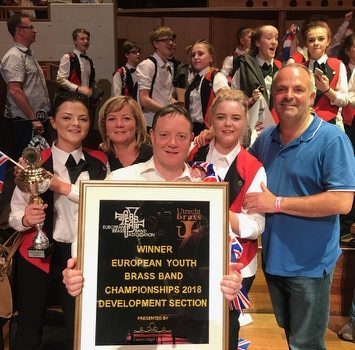 A spokesperson for BBE told A4B: “All three bands representing England, including defending Development Section champion Elland Silver Youth (conducted by Samantha Harrison), which finished in third place, performed extremely well in Utrecht against strong opposition from throughout the continent. It was, though, the performances of the Midlands-based Youth Brass 2000 and Wardle Academy from Rochdale in Greater Manchester that will grab the headlines.

As ever, conductor Chris Jeans assembled a very challenging programme that included the test-piece Chaucer’s Tunes by Michael Ball, all of which Youth Brass 2000 played brilliantly and left no one in any doubt as to the outcome in the Premier Section. Similarly, in the Development Section, Lee Rigg’s musical leadership of Wardle Academy Youth yet again proved to be outstanding as the band performed its programme, which included Philip Sparke’s Valerius Variations, the set test-piece.”

BBE had a strong representation in Utrecht and, speaking about the young musicians’ success, Chairman Mike Kilroy told A4B: “We are absolutely thrilled for the members Youth Brass 2000 and Wardle Academy Youth bands, following their outstanding victories in Utrecht, and we offer them our heartiest congratulations. We are extremely proud of the performances of all three of England’s bands at the European Youth Contest and would like to thank the young musicians, their conductors, teachers, parents and helpers for their huge commitment to performing at the event and representing England so well.
We hope that they enjoyed their performances as much as we did and that such positive experiences will encourage them to play vital roles in England’s resurgence in international banding in the years ahead.”

Fairey Band represented England in the Championship Section in Utrecht, finishing in ninth place following its performances of the set test-piece Time for Outrage! (Marco Pütz) and Defiance (Andy Scott). Mike Kilroy added: “Despite two excellent performances against many of the finest bands in Europe, Fairey Band members will obviously be disappointed with the final result in Utrecht. We offer them our thanks for the commitment they have shown over recent months in raising funds and preparing to represent England at this important event.”