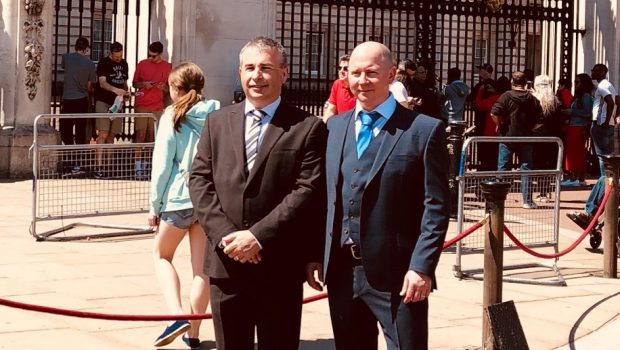 On Tuesday 15th May John Barber and Mark Wilkinson from Foden’s Band were invited by Her Majesty the Queen to attend a Garden Party at Buckingham Palace.

The invitation followed a nomination from Congleton MP Fiona Bruce for their services to Foden’s Band and the support and growth of music education in Cheshire East.

Foden’s Principal Cornet Mark and Solo Trombonist John who collectively have been members of Foden’s for more than 47 years, were joined on the day by 2000 others, who had been similarly nominated to recognise and reward public service. On a blisteringly hot day guests were entertained by music from the Band of the Royal Logistics Corps whilst enjoying afternoon tea, iced coffee, lemon juice and cucumber sandwiches as the Yeomen of the Guard provided all the splendour and ceremony that the afternoon deserved.

In addition to the Queen, other members of the Royal Family in attendance were Prince Andrew, the Duke of York, along his brother Prince Edward and his wife Sophie the Earl and Countess of Wessex. As part of the proceedings John and Mark were fortunate enough to be granted an audience with Prince Edward who thanked them for their work with Foden’s Band and their education work in Cheshire East.

Speaking about the experience, John told A4B: ‘both Mark and I were hugely humbled and honoured to receive an invitation to the Queen’s Garden Party. Foden’s has been a significant part of both of our lives for so many years now that being involved in its support, development and promotion has very much become a way of life. It was a truly wonderful afternoon and a memory that will be treasured for a very long time.’