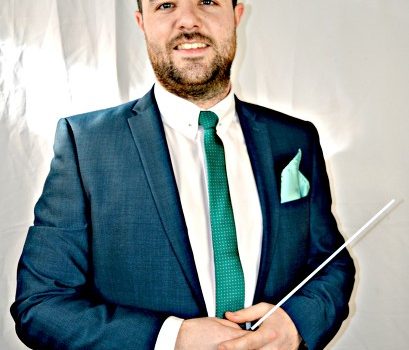 The Mbale Schools Band and Ugandan Brass in Uganda have announced Christopher Small as their first International Musical Director.

The 28 year old Wigston Band Musical Director has taken up the role which will see him travel to the East African Brass Band Charity a number of times a year to help advise and assist in both tuition and conducting the many brass bands that have been set up by their founder, Philip Monk.

On the appointment, Philip told A4B: ‘We are delighted to secure Chris as our International Music Director. Although we have a number of Ugandans who can manage and direct Mbale Schools Band, our senior players, Ugandan Brass, have moved on to another level and would like to attempt more challenging pieces. They can already make a decent show of some fourth section repertoire but I would like to introduce them to Resurgam, Spectrum, and the like.  I feel that this would best be done with an established and experienced U.K. Musical Director and I am pleased that Chris has come on board.

Chris will visit us in December and early January just before we begin our annual concert tours – Mbale Schools Band will travel to Rwanda and Ugandan Brass will visit Zimbabwe. I’m sure that Chris will enjoy making music with us and he will certainly get an enthusiastic African welcome!

Chris told A4B: “I’m delighted to have been invited out to Uganda by Philip and the team and I look forward to making the first of many trips to work with such a hard working group of people. Having seen some of their videos on social media over the years they are an inspiration to us all in what can be done with hard work and dedication along with the generosity and continued support of our movement with the many donations of instruments over the years.”
You can find out more about Mbale Schools Band and Ugandan Brass at: