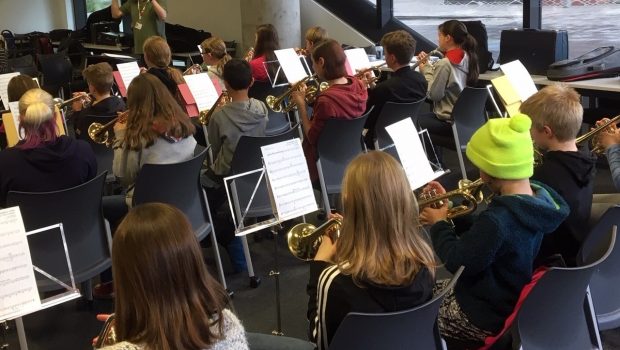 For several months, these organisations have been liaising to put together a new pilot brass ensemble for all the young brass and percussion players across the Sheffield region. It has always been intended that this would be an ensemble that welcomed as many young players to take part as possible, while at the same time ensuring that any alliances with existing brass bands remained unaffected.

The Sheffield Youth Brass Collective will enable brass and percussion players of grade 3 to grade 8 level, and a maximum age of 18 years old to take part in this exciting project.

After much discussion and organisation, two rehearsals were arranged; the first took place last Sunday to great acclaim with more than 50 youngsters attending, and the next will be held on 10th February at the University of Sheffield Diamond Building.

This pilot project will culminate in a special Music Hub gala performance at the Octagon Centre on 24 March where the Sheffield Youth Brass Collective will play a contemporary selection of music led by their Musical Director, Rob Horscroft.

Ian Naylor, Head of Music at the Sheffield Music Hub, who opened the first rehearsal, said that the event was, “by bands, for bands, and with bands.”

Due to the enormous positive interest in the project, plans are already being mooted to extend the initiative, and Stuart Young, secretary of the Sheffield Brass Network told A4B: “This will undoubtedly benefit the 10 brass bands within the Sheffield city boundary and the forty or so more within the wider Sheffield City Region”.

More information can be found about the project by visiting the Sheffield Brass Network website or social media outlets.