Grimethorpe Colliery Band are delighted to announced they have secured the services of  Stephanie Wilkins on Repiano Cornet. One of the most widely respected cornet players around, she is best known for her recent stint as principal cornet of the Fairey Band. 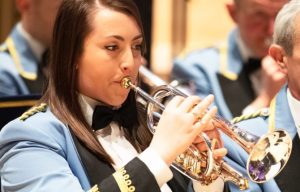 Born in Cornwall, she joined firstly Tongwynlais and then the Cory band, after moving to Wales to study at the Royal Welsh College of Music and Drama, where she was presented with the Harry Mortimer Award for RWCD’s Outstanding Brass Musician.

After seven years at Cory, Steph decided to move North, joining Faireys for a successful two year period on Principal Cornet. Stephanie said of her move to Grimethorpe “I’m over the moon to be joining Grimethorpe. It’s a band I’ve always admired growing up and have been impressed with both on concert and contest stages”, before adding  “I’ve spent just short of two enjoyable years at Faireys and I’m grateful for their friendship and the opportunity to have been Principal Cornet. Having previously played Repiano at Cory, this is a seat which I love and I am excited to be playing again, alongside working with David Thornton and the band’s fantastic soloists, an to be part of The wonderfully unique team of musicians at Grimethorpe.”

Musical Director David Thornton commented, “I’m delighted that we can welcome such an experienced musician to Grimethorpe. Steph’s reputation and achievements speak for themselves and I could not be more excited to continue our work to build a team of talented & committed players to take Grimethorpe forward into the future.”