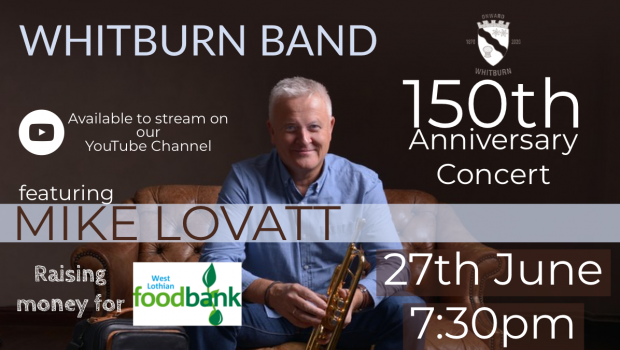 Whitburn Band is looking forward holding a virtual concert with one of the world’s leading trumpet players later this month to celebrate the band’s 150th anniversary.

Mike Lovatt, the Principal Trumpet player with the John Wilson Orchestra and the BBC Big Band, will feature alongside the Scottish Open champion on Saturday, June 27 at 7:30pm in a concert to raise money for local food banks.

The band has ‘virtually’ recorded eight pieces of music – including two with Mike – and the concert will be broadcast for free on Whitburn Band’s YouTube channel.

The event will be raising money for the West Lothian Foodbank, who are providing much needed help to the people of Whitburn and beyond during the coronavirus pandemic.

The virtual fundraising concert will be the centrepiece of Whitburn Band’s 150th anniversary year.

Charlie Farren, Whitburn Band’s Chairman, said: “We are delighted to have the opportunity to perform our 150th anniversary concert despite the difficulties everyone is having just now.

“The band has worked hard to record all their parts individually at home, and everything will be brought together by the technical skills of our percussionist Ryan Bradley.

“We are delighted to have Mike Lovatt as our soloist. He is a joy to work with.

“We are all looking forward to seeing and hearing the final product, and it is great that we can give a little bit back to our community by raising money for the West Lothian Foodbank.”

You can donate money here – https://www.justgiving.com/fundraising/whitburn-band