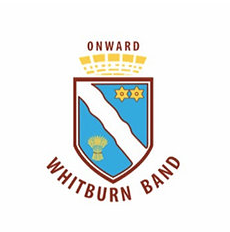 For each band, the players record their parts on their own before technical wizards bring all the audio and video together.

Whitburn’s performance contained three pieces. The band started with Sing, Sing, Sing (With A Swing) before Euphonium soloists Scott Kerr and Chris Shanks were featured in Another Fine Mess! – a brilliant arrangement by Sandy Smith of the music from Laurel and Hardy. Whitburn finished with Matthew Hall’s exciting Nightingale Dances.

As well as winning the overall award, Whitburn’s performance won the prizes for Best Euphoniums/Baritones, Best Trombones and Best Percussion.

The victory for Whitburn was the culmination of a year of ‘virtual’ performances, some of which have featured on Scottish television and the social media of Classic FM.  Overall, the band has had hundreds of thousands of views of its work on social media since the pandemic began.

Like bands around the world, the past year has been really tough for Whitburn. The band has not been able to meet in person since the beginning of March last year.

It is hoped, with the continuing progress of the vaccine programme, that Whitburn will be able to return to its band hall in the coming months to make music once more.

Charlie Farren, Whitburn Band Chairman, said: “We are obviously delighted with the victory and congratulate all the bands and to Cory for putting on this wonderful event.

“The contest has given bands from around the world the opportunity to showcase our talents.

“We all want banding to get back as soon as possible, and this needs to happen sooner rather than later while keeping everybody safe.”

You can watch Whitburn’s entire performance from the Cory contest, as well as its other online performances, on its YouTube and Facebook pages.