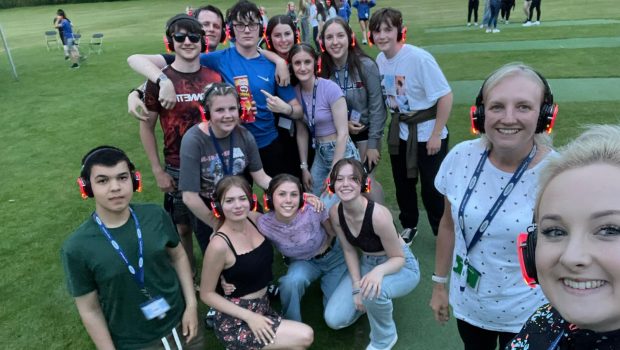 For the young musicians at this week’s NYBBS (National Youth Brass Band of Scotland) summer school at Strathallan in Perthshire, the emphasis has been on having fun. Combined with the excitement of meeting up with friends and fellow instrumentalists for the first time in two years, the occasion is creating memories that will last for a very long time.

While the auditions, sectional practice sessions, master classes and full band rehearsals have provided the opportunity for some serious music making for the hundred or so students, it has been the ‘extra curricular’ events which have brought a more lively element to the course.

But it has been the ‘silent disco’ – in which the participants wear headphones to listen to the music – that has proved the biggest hit with the youngsters.

“Last night’s amazing silent disco gave our youngsters the chance to switch off, rest the chops and have some much needed fun time together. After a famine of two years, we are now ready for our penultimate day of rehearsals.”

The week-long course culminates in a summer concert by the NYBBS Children’s, Reserve and Senior bands which will be live streamed on Facebook tomorrow evening starting at 6pm.

The repertoires for the concert are as follows: