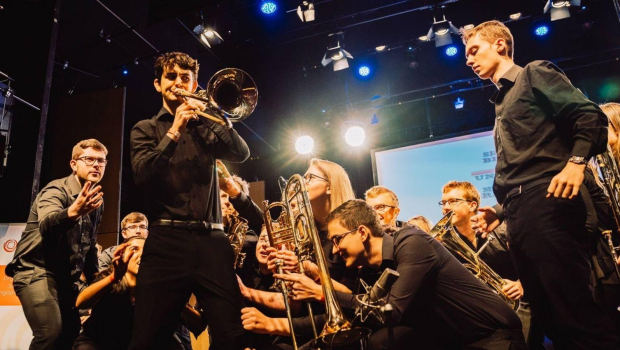 The UniBrass Foundation’s new summer-school, Band Camp, is just around the corner. A new annual initiative, the first Band Camp will be situated in Chapeltown, Sheffield, and will take place from 25 – 30 August.

The group of talented young brass players participating in the course will unite to form a new ‘National Universities Brass Band’, which will present a series of free concerts in and around Sheffield over the bank holiday weekend. The band will play a collection of music including popular tunes from Gershwin’s Strike Up the Band and The Beatles Hey Jude, as well as some classic pieces for brass band. All performances will be conducted by David Thornton, musical director of Grimethorpe Colliery Band.

The weekend will kick-off at 2pm on Friday 27 August with an informal concert at the band’s host venue, the Hesley Wood Scout Activity Centre in Chapeltown. As well as being the first chance to hear the band play, the event will offer a perfect opportunity to find out more about the UniBrass Foundation and how you can get involved. This performance will be free and you can turn up on the day. The outdoor concert will take place at the site’s Campfire Circle but please keep an eye on UniBrass social media for any weather related changes.

On Saturday 28 August at midday there’ll be a unique chance to hear some brass band tunes whilst you enjoy a swim in Hathersage Swimming Pool – a beautiful 1930s outdoor pool in the heart of the peak district park. Whilst the performance itself is free, this event requires paid entry to the pool either for the swim session or as a spectator. Swim and spectator tickets will be released this Friday 20 August via the Pool’s Ticket Source page.

On Sunday 29 August the group will head to Sheffield city centre for a 3pm performance at Barker’s Pool. A public square in the centre of Sheffield, it is home to City Hall, a Grade II listed war memorial, and two beautiful large-scale water fountains. A perfect place to cool off and enjoy a break from your shopping, whilst listening to some live music from the band.

Sheffield Cathedral will provide the venue for the final concert of the long weekend at 3pm on Monday 30 August. The programme will include original works for brass band by Malcolm Arnold (celebrating the composer’s centenary), and Philip Harper’s Olympus, which celebrates the Tokyo Olympics and the endeavour and spirit of all those involved. The concert will also include a World Premiere for Revolution, a brand new work for brass band by John Frith. Organisers ask that you reserve your tickets for this performance in order to guarantee the best seats.

Band Camp 2021 is delivered by the UniBrass Foundation in partnership with Brass Bands England (BBE). Full details for all the concerts can be found on the BBE website under the Events section.