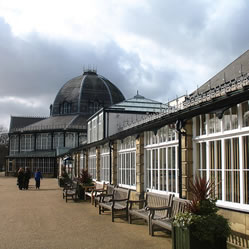 A beautiful setting with banders and their families enjoying the brilliant sunshine, gave the Pavilion Gardens, Buxton, the an air of an impressionist painting. Add to that the sounds of brass bands wafting over the late Spring scene made for many, a perfect day out, on Sunday, 7th May.

Adjudicators, Steve Pritchard-Jones and Mark Wilkinson had the task of awarding the sparking display of silver ware to the competing bands. A delighted Haslingden and Helmshore (Chalkers) band conducted by Simon Cowan took first place in in the Championship and First Section, winning the coveted Stead and Nelson Trophy.