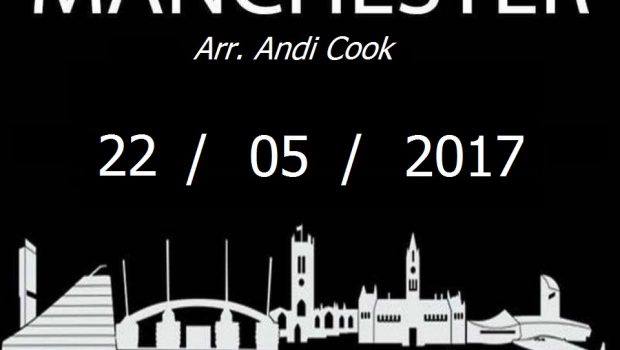 The tragic and awful events of the 22nd of May 2017 have touched many lives up and down the country, but have also been characterised by ordinary people showing their kindness and resolve in the wake of the tragedy. Now a group of musicians have come together to help do their bit, to pay tribute to all those caught up in the events, and raise money for the victims foundation.

At their scheduled performance at the RNCM on Saturday night (27/05/2017) Tubular Brass will open the programme with a specially arranged and dedicated setting of the hymn tune, Manchester, as a tribute to all those caught up in the attacks, and as a salute to the people of Manchester for their spirit and courage in the aftermath.

Following the performance, the arrangement will be made available to purchase online, with all proceeds going to the fundraising campaign started by the Manchester Evening News.

Composer and arranger of the special work, Andi Cook told A4B: “It all came from seeing the people who stopped and helped on the news. I kept thinking what I could do to help – It was so awful to see and like so many people I felt helpless. I wanted to do more than simply donate to charity, and the only thing I could think to do was to write something for everyone affected and hope it would bring people together. In bands, when we celebrate, we usually write a march, and when we commemorate we often write a hymn setting, so it was only a short step from there to the hymn tune ‘Manchester’ by which is a lovely piece of music in its own right. So I pulled a couple of all-nighters to get it done, keeping the setting at a level where it’s accessible to pretty well any band, with the idea that we could sell it, and give the money to the foundation for the victims, and that up and down the country, players and audiences would come together when they heard it.”

Backed by Pennine Music Publishing who immediately agreed to take it on, and to handle the publication and donation of the sales, everything was set firmly in motion. However, it was when Sandy Smith heard about it, that he decided it would be a fitting tribute to include it, in the city it was written for, at the RNCM.

Speaking to A4B, Sandy Said: “Andi contacted me a couple of days ago with the idea and I was more than happy to premiere the arrangement with Tubular Brass at our concert this Saturday evening at the RNCM. Andi’s done a terrific job of it and I hope lots of bands will decide to programme it as soon as possible. In situations like this we all feel a bit helpless, so even a small gesture of solidarity with the people of Manchester, like performing this hymn tune, adds to reinforcing our spirit of defiance against these cowardly acts. It’s a fitting tribute to all those affected by these horrifying events.”

As a further contribution to the cause, Tubular Brass have arranged for 100 free tickets to the event at the RNCM this Saturday to be made available, which can be obtained in return for a donation to the victims fundraising appeal, which will be collected on the night and donated by Tubular Brass on the audience’s behalf. Anyone who would like to attend on this basis should please contact Trever McCormick on 07708 708 774.

Andi concluded: “It’s amazing how everything’s come together so far – everyone I’ve spoken to has been brilliant and so helpful. We all just want to do something, whatever we can, to help. We’re hoping to record the piece as well very soon and put the recording out online where it will be available to a wider audience. All the proceeds from that will go to the charity as well. Watch this space!”

The arrangement is available to purchase now from http://www.penninemusic.com where £10.00 from all sales will go the Manchester Evening News’ fundraising page, to help them achieve their target of £2,000,000. This can be found at https://www.justgiving.com/crowdfunding/westandtogethermanchester

This is a great opportunity for bands across the country to donate towards the cause and get a lovely piece of music in return.