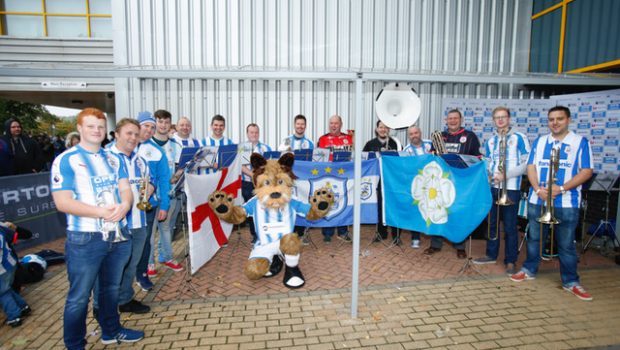 Huddersfield Town’s very own Brass Group, “Terrier Brass” are to perform at the upcoming England Internationals at Wembley Stadium as members of the official England Band. 6 members of the group will be joining the England Band at the friendlies against England on Friday 10th November and Tuesday 14th November.

The England Band have been a permanent fixture at Wembley since 1996 and to date they have played more than 200 times for England, generating a supportive atmosphere from the terraces and witnessing some of England’s most memorable games.

John Hemmingham, leader of the England Band contacted Terrier Brass last month after seeing the band in action on TV and on social media. He told A4B: “Huddersfield Town have grabbed quite a few headlines of late which drew our attention to the amazing support there. Having a high quality club brass band that plays before matches is a great part of this, so it seemed a good opportunity to involve them in the England Band.  As a result they will be making their debuts this month at the games v Germany and Brazil, no pressure!”

Members of the England band are from Sheffield Wednesday but we also draw musicians from Chelsea, West Ham, Torquay, Chesterfield, Norwich, Liverpool, Port Vale and now Huddersfield Town!  When we’re playing for England though, we are all as one -just like the fans on the terrace. I hope the guys enjoy the experience and stay with us for a good while. Who knows we may even get them to the World Cup in Russia. The one we win of course!”

Leigh Baker, Terrier Brass manager told A4B: “It’s a great honour to line up for England and we are looking forward to blowing our own trumpets in representing both Huddersfield Town and England. Many of us were at Wembley for the play off finals and hope we can help bring a little bit of HTAFC red hot atmosphere into the National Stadium again.”