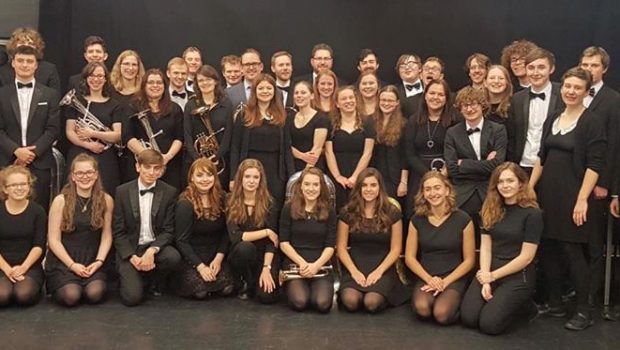 To celebrate the 10th Anniversary of the Lancaster University Brass Band, current and former members of the band joined together for a special concert.

The band was formed by Mike Golding and Bek Chrimes as a 10 piece and in 2007, the University of Lancaster Music Society (ULMS) officially recognised it as a Major Ensemble. Since then, the band has gone on to perform many concerts at the university and around Lancaster, and has competed in Whit Friday every year since 2009.

In 2011, the band founded the UniBrass contest which has established itself as a permanent fixture of the contest season. Lancaster University has achieved third place in 2012 and fourth place in 2015, also winning the Most Improved Band.

For the concert, 25 Alumni returned to join the current band members to create an ensemble of over fifty players. Former conductors Mike Golding, Michael Turner, Max Stannard, Chris Childs, Christopher Wadeson and Chris Osborn all returned to lead the band in a range of pieces which had been voted for by the band. The audience were treated to a wide range of music including Hymn of the Highlands, Jurassic Park and Fire in the Blood.

The concert was organised by the ULMS committee, led by Brass Band Rep Julian Shield and current conductor Georgia Williams. Chris Osborn, who conducted the band for three years told A4B: “It was great to see so many people again, including the band’s first conductor and all the UniBrass founders. The band has developed so much over the last ten years, becoming ever more confident and ambitious. It is now an established part of the university and local community and has changed the face of university banding nationally by founding UniBrass. It was a pleasure to play with both the alumni and current members and I really look forwards to the next reunion.”

Following the concert, a social was held in the County Bar, next to the Great Hall, where many stories were shared and much reminiscing took place. The hope is now to be able to replicate this event in another 10 years.