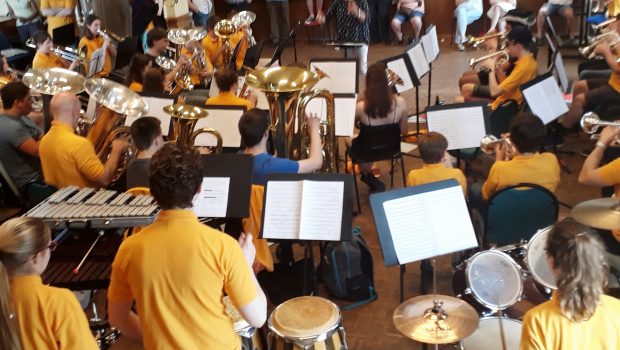 When two West of England bands, Aldbourne and Brunel Brass, got together to discuss ways in which they could collaborate to provide greater opportunities for their young players, the idea of the North Wilts Youth Band was born.

The suggestion was that a composite band be formed specifically to enter the National Youth Band Championships and provide local young players with a greater awareness of what goes on in the banding world outside their own situations. In January of this year players from 6 local bands met for the first time.

With youngsters travelling into Swindon for the Saturday rehearsals co-ordinating things logistically was quite difficult, but Brunel’s Great Western Youth Band hosted the limited rehearsal times and provided a core of players. Their conductor Alan Campbell shared conducting duties with Aldbourne Youth Band MD, Janet Roe. With NWYB members playing experience ranging from a couple of years to those who compete in the championship section, it has been a very steep learning curve for many of the band who don’t ordinarily encounter such challenging music.

It must be said that the young musicians have worked incredibly hard, making new friends and having fun along the way. For many youngsters playing in Warwick last Sunday at the championships was their first experience of performing outside of their own band, let alone playing at a national contest! The NWYB played really well, thoroughly enjoyed their day and already plans are afoot to continue working together.

Aldbourne Youth MD, Janet Roe told A4B: “Thanks to the support of so many at Brunel Brass we did what we set out to do, which was to provide the young players with a fantastic experience. The whole venture was very much a team effort and I thoroughly enjoyed every part of it.”