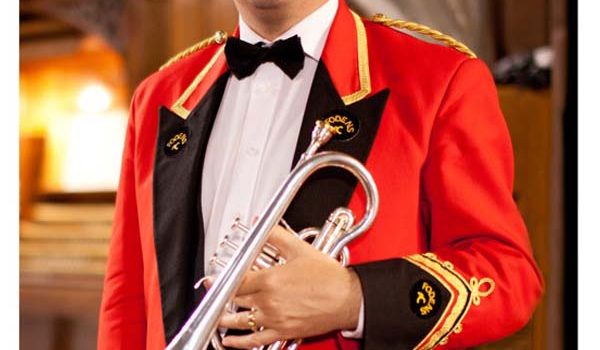 Mark Wilkinson to Give Free Masterclass

Cornet virtuoso Mark Wilkinson, the principal cornet of one of the UK’s top brass bands, the Fodens Band, is to hold a free masterclass for brass players in Solihull on Sunday 20 May.

The masterclass is being organised by Shirley Band and Solihull Youth Brass Band (part of Solihull Music Service), who later in the day will be accompanying guest soloist Mark in concert at the two bands’ Spring Brass Explosion, which is due to be held at Solihull School.

Mark, who has been principal cornet of Fodens since 1992, is Visiting Cornet Tutor at the Royal Northern College of Music, cornet tutor with the National Youth Brass Band of Great Britain and has performed as a soloist all over the world.

Brian Johnson, Shirley Band’s secretary told A4B: “We’re really excited that Mark is joining us in concert for our Spring concert, which we’re also delighted to share with Solihull Youth Brass Band. We’d certainly encourage brass players, music teachers and parents to come to the masterclass and concert, in what I’d expect to be one of the musical highlights of the year.”

Richard Bull, conductor of Solihull Youth Brass Band, added: “Being part of another musical collaboration with Shirley Band will be exciting and inspiring for our students and one which Solihull Music Service really values. We are also very fortunate to be joined by Mark Wilkinson, and I know that each and every brass player at the masterclass and concert will benefit from Mark’s musicality.’’T

The concert – which has been sponsored by Thursfields Solicitors – will begin at 6.15pm and the masterclass will be from 3pm. The two events will be held at Solihull School, Bushell Hall, 793 Warwick Rd, Solihull B91 3DJ.
To sign up for a free place on the masterclass, head to www.ticketsource.co.uk/shirleyband or call 07725 551 374.