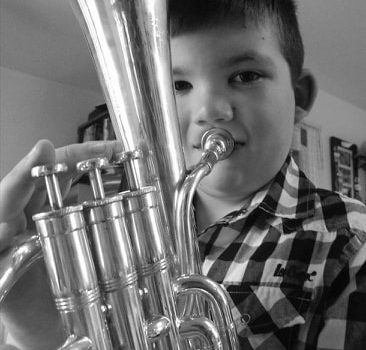 Dexter (age 11) is a regular player with both the Dereham Band and East Coast Brass as well as being a member of the Watton Band, the Oxfordshire Youth Brass Band, the Grimethorpe Youth Band, and the North East Midlands Brass Band Association Youth Band.

He appeared in his first contest with Oxfordshire Youth Brass Band (then known as Blewbury Youth Band) in October 2017 and took part in both the London and Southern Counties regional contest and the National Finals with Great Yarmouth Brass band in 2018.

Dexter’s dad, and Musical Director of East Coast Brass, Paul Speed told A4B: “Dexter has earned his opportunity to play with the National Children’s Band through a lot of hard work and also having a natural talent for music.  He has become a valued member of East Coast Brass’ Tenor Horn section over the last few months since joining the band, and recently performed his first solo with the Dereham Band at their Christmas concert last year.  We are all very proud of him, and hope that this opportunity will give him the chance to develop his playing career further as he looks to emulate his banding hero, Sheona Wade.”