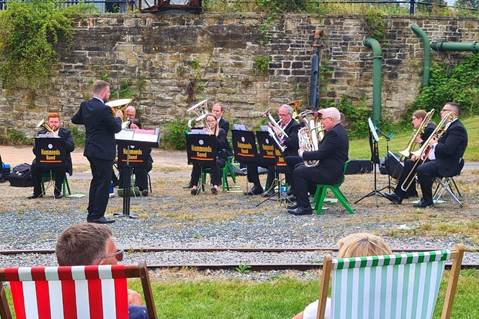 The National Coal Mining Museum for England has launched its new Gala Day! exhibition by welcoming some well-known brass bands to its museum site.

Despite the pit closures, the gala day remains at the heart of many former mining communities. The exhibit shares their memories and experiences, as well as celebrating the links between mining, brass bands and union rallies.

As we are now into the school summer holidays, this special launch event provided a great opportunity for culture-seekers of all ages to experience the heritage offer of the museum, as well as a chance to hear three excellent brass bands, all in the course of one afternoon.

The summer of fun kicked off with performances from Lofthouse 2000, Hade Edge Band and Hammonds Band, who each performed in three locations around the museum grounds. For some of the bands, this was their first performance in nearly 18 months. The outdoor space was perfect for both players and audiences to spread out and enjoy the music in as safe a way as possible.

Performances at the Pit Yard and Miners’ Pantry

The day began with a performance from Lofthouse 2000, playing on the site’s Pit Yard, below the iconic winding gear.

The entertainment continued with Hade Edge making their first performance at the temporary beach, set up for the summer period for those who preferred a more leisurely pace to the afternoon.

Hammonds Band then played at the summer beach to an audience of families playing in the sandpit and relaxing on the deck chairs.

Hammonds also entertained museum visitors in front of the Miners’ Pantry, now the indoor picnic area for the museum. You can watch a short video of the band’s performance on the Museum’s Facebook page.

Hade Edge then performed two sets of entertaining music to finish the day at the Pit Yard, including works such as Goff Richards A Disney Fantasy, to entertain the crowds.

These performances were brought together as part of a partnership between the National Coal Mining Museum of England and Brass Bands England to celebrate the historical link between brass bands and mining, as well as showcase the modern brass band as a living legacy of that cultural heritage.

These particular performances were possible thanks to funding that Brass Bands England received from the government’s Cultural Recovery Fund – a £1.57 billion national investment into the recovery of the arts sector.

BBE Partnership and Relationship Development Manager, Alex Parker, said: “BBE has been working with the National Coal Mining Museum since well before the pandemic, so it’s fantastic to see bands finally returning to the site.

Brass bands have the power to attract loyal audiences as well as enhance the cultural offering of historical sites and venues, so I really hope that BBE will be able to support bringing more bands to this location in the future.

Thank you to all those who played at this special event, especially those for whom it was also their first performance since March 2020. You all did a brilliant job entertaining everyone and providing some lasting memories for those who attended.”

Visitors can go and experience the sights and sounds of Gala Day! in this brand-new temporary exhibition which runs until March 2022. Like the rest of the museum, entry to the exhibit is free.