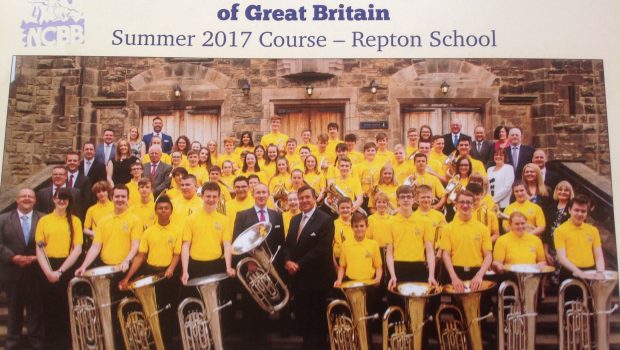 After a week of intensive rehearsal plus a chance to meet others with an affinity for brass bands & music making, Friday 28th July was a chance to show what the National Children’s Brass Band of Great Britain 2017 was capable of.

The concert began with a smart opening of the new Alan Fernie piece, Starlight (fans of Prismatic Light will like this!) which set a high standard to be maintained throughout the concert. Following on from this,  the band performed Philip Harper’s Olympus and you could close your eyes and ask ‘Is this really just youngsters?’ The piece was played in such an appropriate style. The slow section began with some fine soloists and what a sound from the young lady on principal Baritone. This all built to a fine conclusion.

A guest soloist is a great idea and the opportunity to work with tuba artist, Joseph Cook was clearly relished by all the players on stage. Three solos were interspersed with interviews and included a world premiere. Items performed were, On the Run (Frederik Schjelderup) Lights on the Tyne (by Simon Oliver who was in attendance) and Tico-Tico (Zequinha de Abreu arr. John Iveson).

A first half finale of World Tour (Rodney Newton) was a good challenge for the young, talented musicians. Quality playing was delivered from around the stands with the flugelhorn and principal cornet paticularly, performing with maturity.

Following the interval, the second half began with Cyclone (Michael Oare). This is no easy start for players of any age or experience. The work is different from the normal openings we are perhaps used to, but it is full of colour and atmosphere.

Kabalagala (Alan Fernie) allowed the players to show a more relaxed side to the band. So often in this relaxed mode, it is easy to lose the basics and tightness of the ensemble, however, this was not on show today, particularly not on Professor Childs’ watch. An enjoyable piece with some fine bass trombone playing towards the end, capped a great performance from all.

Joseph Cook then returned to perform The Grumpy Troll, an unaccompanied tuba solo. Removing the 4th valve slide allows for an alternative sound (not unlike the echo cornet) and the effects are mind blowing in the hands of such an expert. the piece Quicksilver provided some virtuoso solo playing with brilliantly controlled backing from the band.

Owen Farr then took to the stage to lead the band in a selection of songs from Frozen. This time, every one was singing with the tutors providing the accompaniment. A vocal encore of ‘I’m Happy’ certainly created a great and happy atmosphere.

The Final Voyage (Paul Lovett-Cooper) is a musical portrait that requires film, spoken introduction and of course, the band. It is a spectacular piece of music and a perfect choice to bring the concert to a close. The synchronisation of the music and film was incredible.

For encore, The Valdres March provided us with some high class soprano cornet playing and audience participation. With an X-Factor style introduction, Professor Childs introduced the section of the week. This award was given to the cornets on this occasion.

If this concert was anything to go by, the future looks good for British banding. Congratulations must go to all the staff and tutors and of course, Professor Childs for his leadership. Well done to each and every one of young and talented musicians, we look forward to more in the coming months.